The world's largest automaker Fiat Chrysler Automobiles is advertising a Super Bowl of the seventh consecutive year under Chief Marketing Officer Olivier Francois. Such advertisements using celebrities like "Rap God" rapper Eminem is a wise investment, according to an expert. 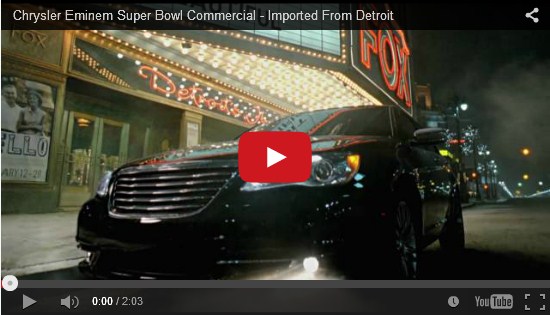 In 2011, FCA had a Super Bowl advertisement titled "Born of Fire" featuring Eminem for the Chrysler 200. According to Super Bowl ads specialist and Michigan State University advertising and public relations professor Robert Kolt, the advertisement was successful.

"Is $5 million worth 30 seconds in the Super Bowl?" Detroit News quoted Kolt as saying. "I would say if it really turns around the company and makes the sale long after it airs, it's a great investment, and it did for Chrysler."

"Chrysler was really on the rocks when that Eminem spot appeared," Kolt added. Eminem's most recent album before the "Born of Fire" Super Bowl ad for the Chrysler 200 was "The Marshall Mathers LP," which has the collaboration song "Stan" featuring Dido.

Following the Chrysler 200 ad featuring Eminem in 2011, FCA featured "Million Dollar Baby" director Clint Eastwood in the 2012 ad that declared "it's halftime in America." It became controversial when Republicans criticized it for seemingly promoting Barack Obama.

FCA spent $139.9 million during the Super Bowl over the past 10 years making it the third-biggest spender behind Anheuser-Busch InBev with $278.3 million and Pepsico Inc. with $172 million. Coca-Cola Co. also spent $118.4 million while General Motors Co. spent $86.8 million.

On Feb. 4, Thursday, FCA announced that they are returning to the Super Bowl with two new commercials. Like in the past years, the automaker did not announce which brand or vehicles will be in the ads and the lengths of the ads, according to Detroit Free Press.

The FCA ads will make their debut after the half-time performance and before the fourth quarter. Watch the 2011 Super Bowl ad for the Chrysler 200 featuring Eminem here: