17 Images From The Awesome Hulk Vs. Ant-Man Marvel/Coke TV Spot

During Super Bowl 50, Marvel and Coca-Cola teamed up for a super hero showdown. 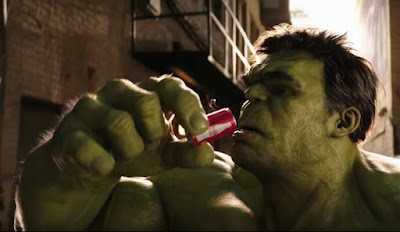 The new commercial showed a quick battle between Ant-Man and The Hulk after Scott Lang attempted breaking into Dr. Banner's lab and stealing a mini-can of Coke. In the end, they ended up being buddies as Ant-Man helped Hulk open up the can too small for his giant green fingers.

Super hero fights aren't uncommon in 2016. The next time we see Marvel heroes on the big screen, they'll be throwing down in Captain America: Civil War. While Ant-Man will be there (as seen in the Civil War Super Bowl spot), the Hulk will be sitting this one out and next appearing in Thor: Ragnarok in 2017.

Captain America: Civil War picks up where Avengers: Age of Ultron left off, as Steve Rogers leads the new team of Avengers in their continued efforts to safeguard humanity. After another international incident involving the Avengers results in collateral damage, political pressure mounts to install a system of accountability and a governing body to determine when to enlist the services of the team. The new status quo fractures the Avengers while they try to protect the world from a new and nefarious villain.